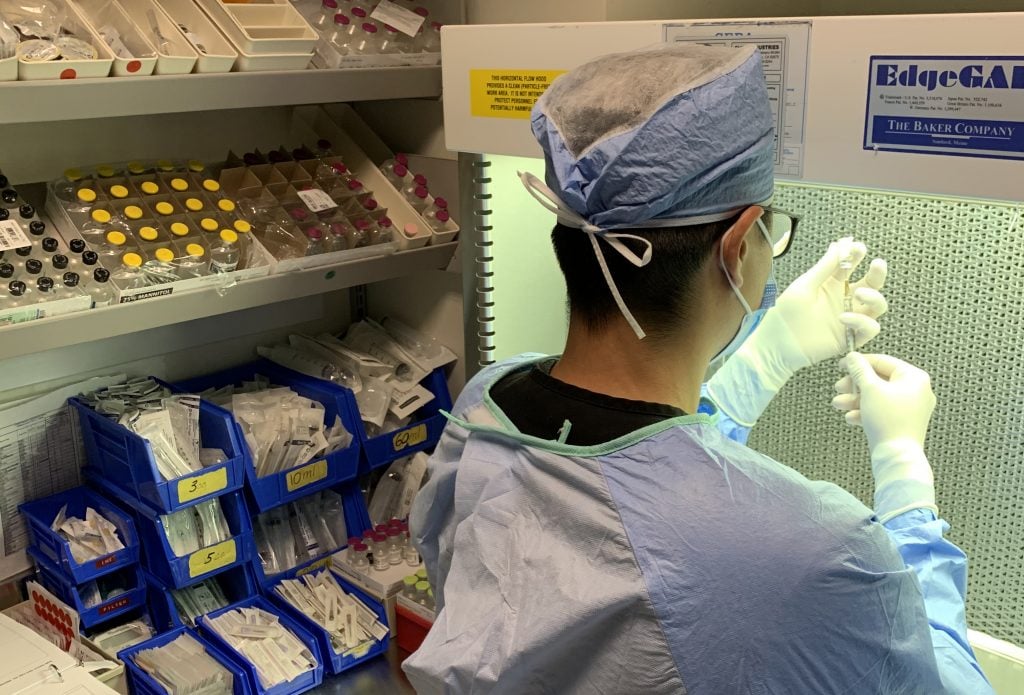 It seems like there’s more good news about COVID-19 vaccination every day. In November, companies Pfizer, Moderna and AstraZeneca all announced promising late-stage clinical trial data on vaccines meant to prevent infection by SARS-Cov-2, the coronavirus that causes COVID-19.

By November 30, Pfizer and vaccine partner BioNTech, as well as Moderna, had already applied for emergency approval with the U.S. Food and Drug Administration. And if all goes well, some people could begin receiving the vaccination before the end of the year.

Meanwhile, the COVID-19 death rate fell to about 1 percent in late November, compared to about 6 percent in late April, according to the Centers for Disease Control and Prevention (CDC). The decline was analyzed in a ​Journal of Hospital Medicine​ paper in October, and the authors concluded it was due at least in part to improvements in treating the disease — such as corticosteroid and antiviral medication use — as well as the fact that those being infected are younger and have fewer underlying conditions than patients at the beginning of the pandemic.

It’s enough to make you think that despite skyrocketing infection rates, the days of mask-wearing , hand-washing, podding up and locking down will soon be behind us.

“The future outlook to me is very bright, because of the fact that we have so quickly developed effective treatments and we have vaccines coming up,” says Bilal Naseer, MD, an infectious disease specialist and critical care doctor at CommonSpirit Health in Carmichael, California.

If that sounds further out than you thought, you’re not alone. It’s roughly half a year longer than the general public is expecting, according to a national online survey by the Illinois-based investment company SBB Research Group, which reports that people in the U.S. expect their lives to “generally return to normal” by July 2021.

Don’t make plans just yet to invite everyone you know to the cookout-to-end-all-cookouts this coming Memorial Day. Several hurdles still stand between us and whatever the new normal will be, according to Dr. Naseer and another expert we spoke with: Philip Robinson, MD, the medical director of infection prevention at Hoag Memorial Hospital Presbyterian in Newport Beach, California. Dr. Robinson’s hospital is the location of a small, early-stage clinical trial for a COVID-19 vaccine being jointly developed by NantKwest and ImmunityBio.

Why Spring Cleaning Won’t Include Tossing Your Masks

Even if the public begins to get Pfizer and Moderna’s vaccines in December, there will be a limited supply. BBC News reports that both companies estimate they will have enough doses for 30 million people by the end of 2020. But keep in mind that, as of early December, the U.S. population exceeded 330 million, according to the U.S. Census Bureau.

Pfizer and BioNTech said their doses will be available in the U.S. for “high-risk populations” this year. On December 1, a CDC panel of advisors recommended that health care workers and residents of long-term care facilities, such as nursing homes, be first in line for vaccination.

Dr. Robinson describes the following potential timetable for vaccinating people through 2021, based on guidelines from the National Academies of Science, Engineering and Medicine:

Dr. Robinson estimates that phase four may come as early as late spring or early summer next year.

Not Everyone Will Take a Vaccine Once It’s Offered

A significant hurdle will be overcoming reluctance to take any of the vaccines available next year. Not everyone believes a vaccine will be effective, and some people are skeptical because the vaccines are moving through their testing phases more rapidly than usual, Dr. Naseer says. Vaccines typically take 10 to 15 years to develop, according to the College of Physicians of Philadelphia.

“The things that we get concerned about when we talk about a new vaccine is the safety, meaning it can lead to a reaction that was not observed because the timeframe of the study was too short,” he explains.

But, he adds, given the lethal nature of COVID-19, “The benefits of the vaccine certainly would outweigh the risks. At least if you ask any physician, they would have no doubts about it.”

Dr. Robinson counts himself as one of those who would take a vaccine as soon as it is available to him.

“The vaccines have been tested for safety and efficacy, just as they would in a standard process,” he says. “One of the reasons these COVID-19 vaccines are able to move through the clinical trial process so quickly is due to increased government funding. This has helped researchers proceed with multiple steps in the drug development and testing process at the same time, rather than slowly over time.”

Still, only 58 percent of Americans surveyed by Gallup in late October said they’re willing to take a free, FDA-approved COVID-19 vaccine. That’s up from 50 percent in September, and it remains to be seen if that will inch higher in the survey period following the news of Pfizer, Moderna and AstraZeneca’s promising results.

Meanwhile, less than 10 percent of people in the U.S. were estimated to have detectable antibodies for SARS-Cov-2 as of September, according to a CDC study published in ​JAMA Internal Medicine​.

“Real herd immunity requires that at least 60 to 70 percent of a population becomes immune through natural immune responses or through vaccination,” Dr. Robinson says. “This is different than mitigation factors, such as mask wearing and social distancing, which affect the transmission of the disease, not the immune system itself.”

Vaccine Effectiveness May Be Lower in Real-World Settings

Dr. Robinson says the efficacy rates being reported by Pfizer (95 percent), Moderna (94.1 percent) and AstraZeneca (90 percent if a half-dose is followed by a full dose, but 62 percent in two full doses) are a big deal, and can’t be overstated.

“The novel coronavirus, which leads to COVID-19, is twice as contagious as influenza, the virus that causes the flu. For the flu vaccine to protect the population, it needs to be 30 to 40 percent effective,” Dr. Robinson says. (The CDC says flu vaccines are on average 40 to 60 percent effective each season.)

“For a coronavirus vaccine to stamp out an outbreak, it only needs to be 50 to 60 percent effective. So, a vaccine that is greater than 90 percent effective is incredibly promising,” he says. “My hope is that if enough people get the vaccine, we could put an end to this pandemic,.”

You might think that 58 percent of people taking the vaccine would nearly get us there, because, for instance, 95 percent of 58 would be 55 percent — and that’s on top of people who have already recovered from COVID-19 in the U.S.

But Dr. Naseer says there’s likely a difference between the efficacy rates that Pfizer, Moderna and AstraZeneca are reporting and what will happen once people take it in the real world.

“If you look at influenza, for example, the vaccine that we have lots of data on, we almost never get the same results,” Dr. Naseer says. “First, the population is diverse, and not everybody responds in the same way as the study participants do. Second is that viruses may actually change,” in small ways that affect your immunity to subsequent strains. For example, in the unusual 2014-2015 flu season, vaccines were only 19 percent effective. In part that’s because, according to the CDC, the prevailing influenza A strains had mutated slightly from the recommended strain.

Which begs the question: Would we need to have new COVID-19 vaccines each year to stay ahead of the virus? “Only time will tell,” says Dr. Robinson. “Some vaccines [for other diseases] provide protection for decades, while others require booster shots. By carefully monitoring the rollout of the COVID-19 vaccines and the transmission rates, we will develop a better understanding over time.”

Meanwhile, more people must be willing to be vaccinated in the first place to get us closer to herd immunity.

Reasons vary for why people avoid vaccines or other measures to reduce their risk of being infected with the virus that causes COVID-19.

“The biggest myth about COVID-19 remains that the disease is not real. It is very real and has already claimed the lives of 250,000 in the United States,” Dr. Robinson says. “While most people who get the diseases tolerate it well, it is not something you want. Many people remain sick for a long time, with several lingering effects being reported.”

Many people also simply think it would be unnecessary for them to be vaccinated.

“[Some] people in their 20s and 30s feel they do not need it because they are young and they believe that the herd immunity would be sufficient without the vaccine,” Dr. Naseer says. “They just feel protected, whereas we know from the data that, yes, the incidence of the disease is higher in elderly and those with compromised immune systems, but it can cause really severe disease and severe hypoxemic [low blood oxygen] respiratory failure, even in very young people with no underlying medical conditions.”

Another myth is that measures taken to prevent the spread of the disease — like social distancing and mask wearing — don’t work, Dr. Robinson says. This just isn’t true.

How to Stay Safe in the Meantime

The CDC’s guidelines include:

Take Care of Your Health

Dr. Naseer advises everyone to try to keep their weight and blood sugar under control. That’s because obesity and type 2 diabetes are among the underlying conditions that the CDC reports increase your risk for serious COVID-19 illness, along with cardiovascular disease, kidney disease and smoking.

“If you have not focused on your weight and your nutrition and your fitness before, now is the time,” he says.

While the summertime blowout you may have been planning likely has to wait, Dr. Naseer predicts of a return to unfettered public gatherings by 2022.

“I think the ultimate test of safety is that you will be able to host big sporting events and concerts without masking. That kind of protection, I think, is in 2022 or beyond.”

Among those who concur with Dr. Naseer’s prediction is William, a Brooklyn, New York, resident who was among those waiting in a long line for COVID-19 testing three days before Thanksgiving (and asked that his last name not be published) — a new pre-holiday ritual that many hope won’t have to last. Still, he thinks that a year from now, what we return to will be a ​new​ normal.

“I think there will be this cultural and psychological hesitance to just transition into normal as usual, and I think normal is going to be very different,” he tells LIVESTRONG.com. As in, don’t throw out your masks when we’re back to mass gatherings. “I think there are cultures that have already transitioned into the commonality of mask-wearing.”

William has a brother living in Beijing, China, where he notes that mask-wearing to prevent infection is “a very normal thing.” Face masks have been worn in East Asia at least since the 1918 influenza pandemic, for health reasons and later, to also guard against air pollution or sun exposure, Massachusetts Institute of Technology historian Emma Teng explains in a news article published by the university.

Even so, developments on the vaccine front point to a bright future, Dr. Robinson says. “A vaccine that protects the majority of the population from contracting the disease will spell the end of this pandemic. Reports about the effectiveness of the upcoming vaccines is the light at the end of the tunnel.”