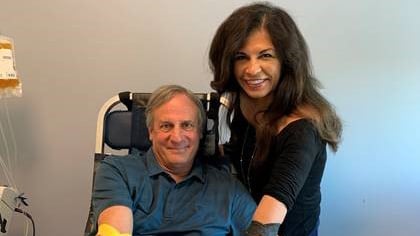 Janie and George Nichols were among the first in Orange County to test positive for the novel coronavirus, and now they’re hoping their plasma will help others fighting the illness.

“I would have thought I’d have a little cold, that’s it,” Janie said. “Fever, sweats, aches, I had a little tickle in my throat.”

But George was luckier, experiencing no symptoms at all.

And after making sure that both were fully recovered from the virus, doctors at Hoag Hospital asked them todonate their plasma.

“This is saving people’s lives,” Janie said. “So George and I were just, like, very moved.”

The couple donated their plasma as part of a national clinical trial to see if it can help save the lives of critically ill COVID patients. So far, Dr. Michael Brant-Zawadzki at Hoag said the study looks hopeful.

“We have a great team that’s fighting this disease in seriously ill patients,” he said. “Now we have an additional arrow in the quiver, the antibodies from convalescent serum. We’ve administered that to three patients here at Hoag, and all three have improved.”

Researchers at the University of Southern California suspect that up to 400,000 people in Los Angeles County may have already been exposed to the virus and have antibodies.

Both Janie and George hope those survivors donate their plasma as well.

“Anybody else that is in our position, I hope that they’ll go out and donate their plasma, because it’s going to save someone’s life.”

Brant-Zawadzki said the antibody trial was only in the beginning stages, but doctors say that if everyone who has tested positive for COVID-19 and recovered was able to donate plasma, they might be able to find some answers to the crisis.