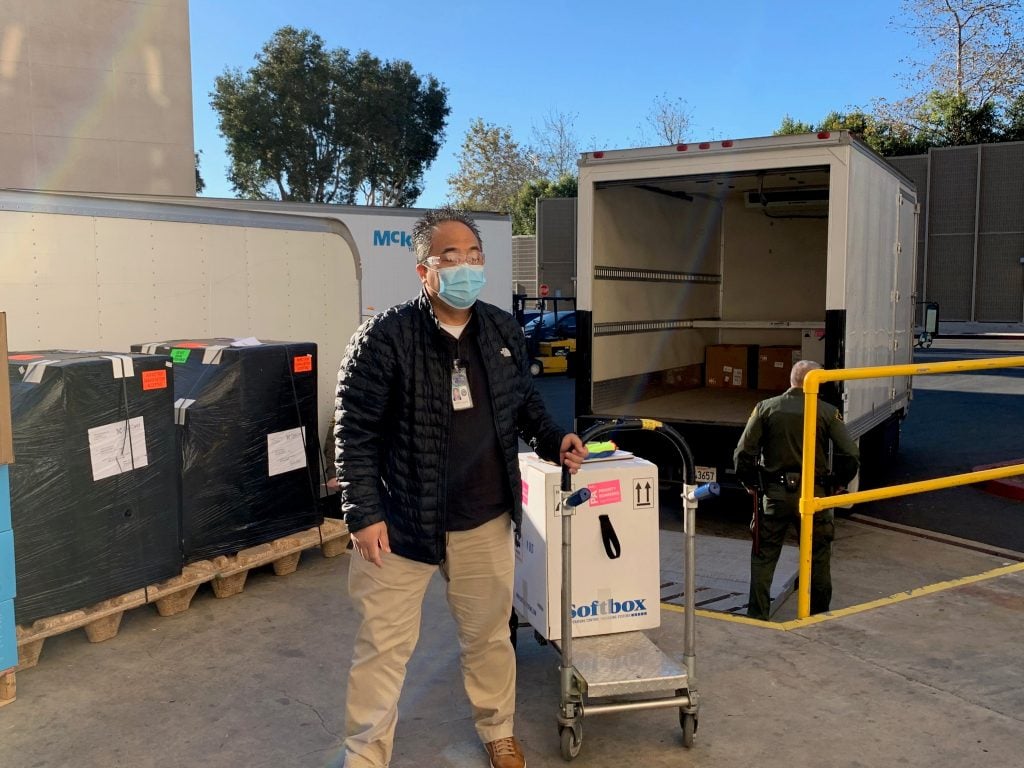 With the sleeves of their hospital scrubs rolled up, more than a dozen medical workers helped usher in what Orange County Health Officer Dr. Clayton Chau called “the beginning of the end of COVID-19” by volunteering to be vaccinated on Wednesday, Dec. 16.

Several area hospitals received the county’s first doses of the Pfizer/BioNTech COVID-19 vaccine on Wednesday morning, and as shutters clicked and cameras rolled, frontline staffers offered their upper arms to kick off a campaign to get Orange County vaccinated.

In a county press conference at St. Joseph Hospital in Orange five frontline employees were inoculated. A few hours later, another batch of workers at UC Irvine Medical Center received shots in front of officials and media. All will get a second dose in about three weeks for maximum effectiveness, which is reportedly around 95%.

“I feel like I’m waking up from a dream,” Dr. Lourdes Swentek, a UCI Health trauma critical care surgeon, said after her inoculation. “It’s everything, being able to see a future for my daughter.”

The first shots in the U.S. were given in New York City on Monday, as doses also began arriving at Southern California hospitals.

When the dry ice-packed vials (Pfizer’s vaccine must be kept extremely cold until ready to use) arrived early Wednesday at St. Joseph, there was little fanfare. A plain white van with an Orange County logo on it pulled up to where a few Orange police officers and Orange County Sheriff’s Deputies were waiting, and a large white box was removed, placed on a cart and rolled into the building.

The vaccine comes not a moment too soon for local hospitals, which are seeing the most Orange County residents hospitalized with COVID-19 since the beginning of the pandemic. The county is deploying field tents and extra beds to supplement nearly full facilities, and the demand for care is putting a strain on nurses, respiratory therapists, custodians and other staff, officials said.

“When normally we would be celebrating the holidays, they’re taking extra shifts,” St. Joseph CEO Jeremy Zoch said at a press conference, minutes before some of those workers were given the vaccine.

That makes it even more important for health workers to avoid becoming ill. UCI Health respiratory therapist Erik Mara, who got inoculated Wednesday, said he had COVID-19 over Thanksgiving and he doesn’t want to see anyone go through it if it can be avoided.

“It was a wake-up call for me too, because it doesn’t matter how healthy you are – COVID will wreak havoc on your system,” Mara said.

UCI Health expects to vaccinate about 3,000 workers in the first round, and Hoag Hospital officials said they plan to start inoculations Thursday morning.

Orange County’s initial shipment was expected to include 25,350 doses. So even with another 17,000 doses expected next week and 32,000 doses of Moderna’s vaccine coming pending federal approval, it could take weeks to get enough vials to cover everyone in the highest-priority groups. They include thousands of frontline health care providers, staff and residents in long-term care facilities, workers considered essential and high-risk patients.

“We have all worked so hard to get to this moment, and yet we understand there is much more to get done,” Chau said, talking about the logistics ahead of vaccinating Orange County’s large and diverse community.

Chau and other officials took the important moment to re-emphasize that everyone should continue to wear masks, frequently wash hands, stay socially distanced and avoid mixing households during the holidays.

Zoch of St. Joseph said he skipped a visit to family in Minnesota for the first time in 45 years in the hope of keeping loved ones safe.

“If you can, do this holiday season differently,” he said. “It is the No. 1 most important thing you can do.”

The next big task for public health officials will be persuading the public to get the vaccine as soon as it’s more widely available, likely by next spring. As if to illustrate the challenge, while health officials at St. Joseph spoke during a press conference livestreamed on Facebook, several people posted comments calling the vaccine “experimental” and “dangerous.”

Dr. Susan Huang, UC Irvine’s medical director of epidemiology, said it will be important for health experts to explain that the unprecedented speed in developing COVID-19 vaccines was made possible not by forgoing normal protocols, but by money, which sped up patient recruitment for trials and helped increase manufacturing and distribution capabilities.

Within two days, more than 2,500 UCI Health workers signed up to get the vaccine, Huang said. That’s also about the average number of Americans currently dying of COVID-19 each day.

“Everybody in health care has seen the death and destruction that this virus can cause, so we’re ready to have a way out,” Huang said. “We desperately want to return to normal life.The way to get there is to get the vaccine.”